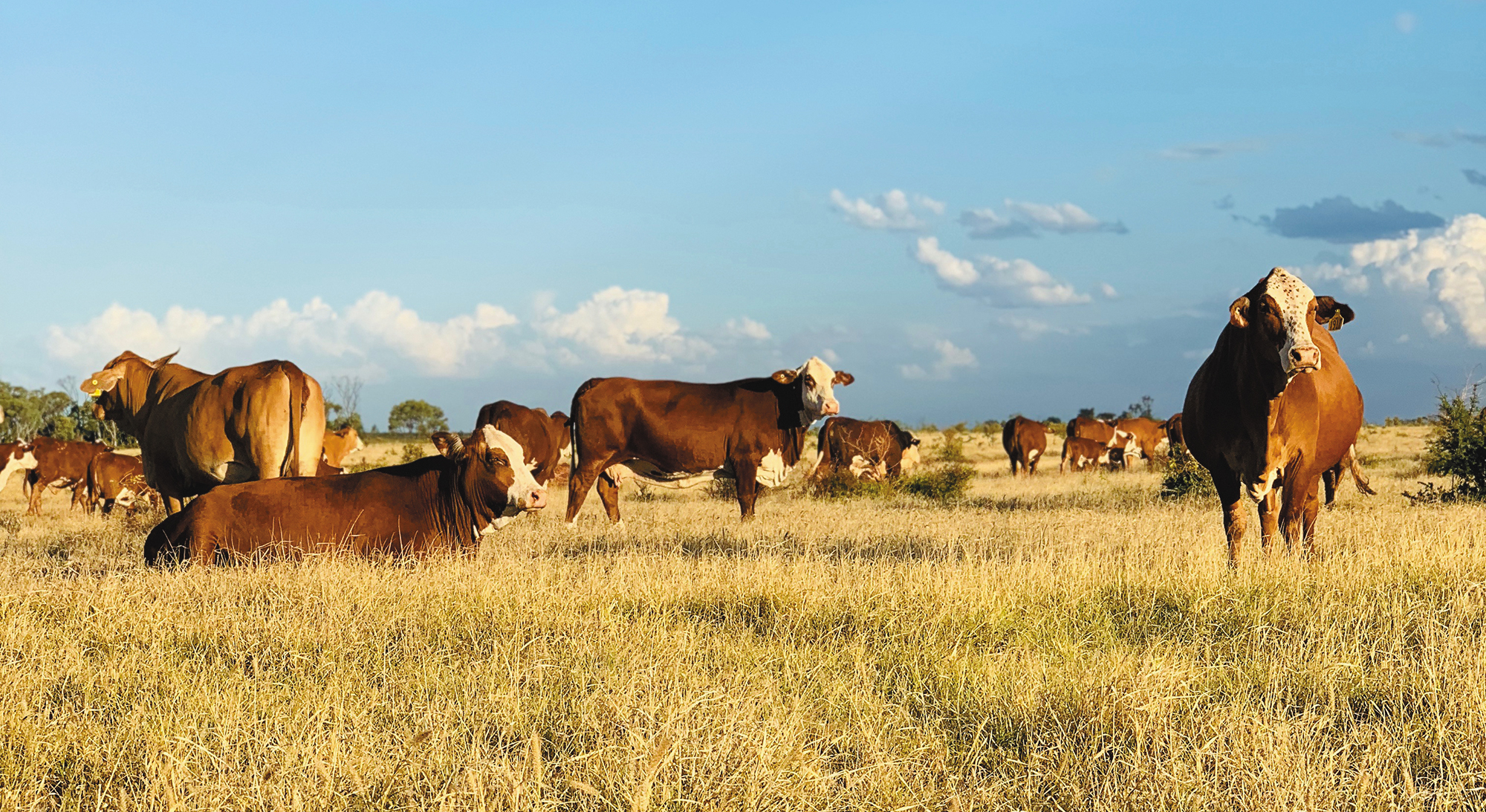 The Marks family of ‘Winvic’, Clermont have been quietly breeding Braford cattle since the late 1960s and today the family are focused on continuing with the tradition.

Vic Marks drew the 2674ha Kilcummin district property in an ex-servicemen’s ballot in 1957. He and his sons Terry and Charlie, who were aged 14 and 12 at the time, took up the selection in December of the same year. Vic’s wife Winifred and their 3 daughters joined them at Winvic in the summer of 1958. The family quickly got to work establishing a homestead and infrastructure on the mainly brigalow and black soil downs country developing it to support a mixed cropping and grazing business. In partnership, Terry and Charlie established the Winvic Braford Stud after classifying a number of females in 1971 and joining them to Dandaloo 222. Throughout the 70s the brothers invested in bulls from Dandaloo, Arabanga, Rarcamba and Clifton Studs. Clifton Senator (x Clifton Soda) was perhaps the most influential sire used within the herd, having 79 of his daughters registered under the Winvic prefix. Another bull, Rarcamba Goggles is, to this day, remembered as a standout and a favourite by Charlie’s wife Evon.

By the 1980s the partnership had purchased the 5000ha neighbouring block ‘Niagara’ and Terry, his wife Colleen and their young family moved to the newly acquired property. Eventually the brothers’ partnership was dissolved and Terry and Colleen took their share of the ‘Winvic’ Brafords to Niagara. The registered stud ceased operation by 1983, however Charlie and his wife Evon maintained a strong interest in the Braford breed, keeping their ‘stud’ herd in operation, albeit not registered, for the purpose of breeding replacement bulls and females for themselves and for paddock sales of herd bulls to local cattlemen.

During the 80s and 90s stud sires were purchased most years from the National Sale at Gracemere with a preference for high Brahman content bulls. The list of influential sires used over these 2 decades includes bulls from Doonside, Abernethy, Craigmore, Rossman, Youlambi, Ka-Amm and Ascot Studs. The stud herd maintained its importance during the 2000s when a 5000ha forestry block, McMasters was purchased expanding the breeder herd and increasing the number of herd bulls required for commercial production. High content bulls were again a strong focus and were selected to suit the tougher forestry conditions with purchases from Uralla, Alberta, Harriet Valley, and Abernethy Studs. Red Brahman sires were also introduced into the stud and commercial herds to lift content.

In 2014 Charlie and Evon retired to Clermont and their youngest son Darren and his wife Alice with the help of their 3 daughters, Olivia, Natalie and Amelia, took over the management of Winvic, Yidney and McMasters. In the same year Darren and Alice purchased a coastal block, Hallevale, in the St Lawrence district, which enabled them to double their breeder numbers.

Since taking over the breeding operation Darren and Alice have only invested in polled genetics and have introduced Poll Hereford bulls to make a quick and economical progression toward an entirely polled herd without compromising growth traits and structure. The best Hereford cross female progeny are retained to be joined back to polled Braford or polled pink-nosed red Brahman bulls. With advancements in genomic testing technology Darren and Alice now join their stud herd of around 100 females to multiple sires and take DNA samples to sire verify and poll/horn test the progeny, identifying valuable PP animals. They also poll/horn test all purchased bulls if the testing has not already been done by the vendors. Darren and Alice’s eldest daughter, Liv, has helped to establish an annual AI program after training with Greg Fawcett, aiming to increase genetic diversity using polled red Brahman, Hereford and Braford genetics over Braford, red Brahman, F1 and F2 Poll Hereford heifers.

When asked which bull has had the biggest impact at Winvic, Darren rates a polled sire purchased at the 1997 National Sale, Kooroomba Olley 757 (x Doonside Madison) as the most influential, having served in the stud herd for 4 years before joining commercial females for a number years. He produced a lovely line of replacement females and a number of high quality polled herd bulls. Alice believes the current 2019/20 drop of calves by Carinya Tullock, Linlora Ivor and Donrinda Lewis are the best line of calves they have bred to date.

Taking the opportunity to visit studs including Carinya, Downfall Creek, Glynelly, Linlora, Double C, Donrinda and Little Valley has fostered many friendships and given the couple an appreciation and respect for the dedication these breeders have to the breed. Having visited some of these studs and inspecting their beautiful female lines, four registered heifers from Carinya, Downfall Creek and Little Valley Studs were purchased at the 2018 New Dimension Sale introducing outside female bloodlines into the Winvic stud herd for the first time since its establishment in the 1970s. Olivia and Alice repeated the investment in female genetics at the 2019 New Dimension Sale, this time bidding from home using the online Elite Livestock platform. On a visit to Little Valley Stud in 2017 a bull calf caught Darren’s eye and after heading back for second visit to see how he had matured and trying unsuccessfully buy him out of the paddock Darren finally secured him for $19,000 at the 2019 National Sale. The bull, Little Valley Jerrod (x Neimen Eli) a big muscle bull, has been joined to best of the Winvic females this season. His progeny are eagerly awaited.

After four difficult drought years and the blessing of a 200mm downfall at Winvic thanks to cyclone Trevor in late March 2019, Darren and Alice took the opportunity to travel to severely drought stricken NSW to view Doug and Susie Barnett’s cows and heifers for sale as part of their Baroma Downs dispersal. Impressed with the exceptionally quiet temperament of the Baroma Downs cattle, they purchased 89 polled females, 32 of which were registered, and 2 bulls. The much loved Baroma Downs breeder herd have been joined this season to Neimen Idaho (PP) (x Ascot McDougal 1795) who was purchased at the 2019 National Sale. The acquisition of the Baroma Downs cattle has forced a rethink of the Marks’ enterprise mix and after being entirely commercially focused, Darren and Alice recently decided to reestablish the Winvic Braford Stud. This year, for the first time since 1982, they will register progeny under the Winvic prefix. They also hope to classify a few of their highest performing Winvic females so they can continue on with the legacy that Charlie and Terry founded back in the 70s. Currently joining 1200 Braford and crossbred females, the Marks’ focus going forward is to breed their own replacement bulls and females based on their commercial breeding objectives – temperament, structure, weight for age and high IMF with moderate rib and rump fat, whilst making available a few select bulls every year to other breeders.

Quietly selling herd bulls out of the paddock to repeat buyers for decades, Darren and Alice have for the past 2 years joined their neighbours, Doug and Amanda Burnett, as vendors at the annual ‘Bendemeer On Property Bull Sale’. It was very pleasing for Darren and Alice to have 2 of their Composite bulls sold at the sale find their way into high performing Droughtmaster and Santa/Angus commercial herds, the other 3 bulls selling to established Braford breeders. In 2020 the Marks family will present sons of Carinya Sherman (x Little Valley Kahu) alongside Winvic Hereford/Braford composite bulls at the Bendemeer Sale. 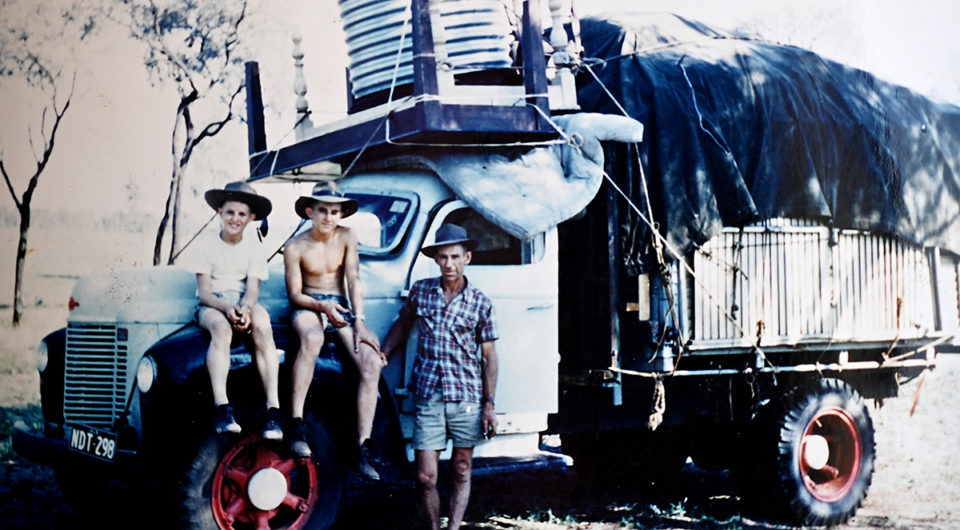 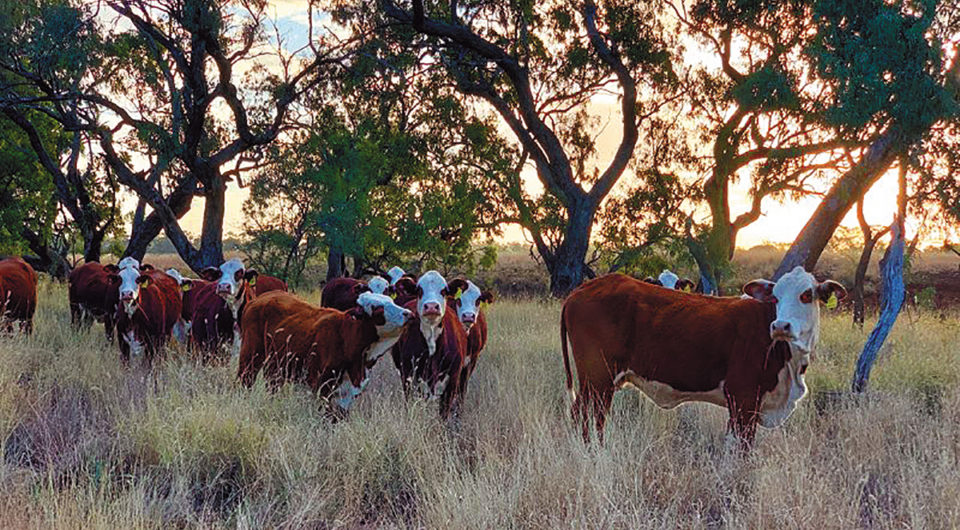 Winvic Bulls to sell at the Bendemeer Production Sale Clermont